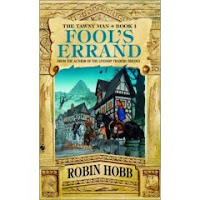 This is inspired by A Reader's Respite's review of King's Fool to celebrate April Fools' Day. Reading it reminded me that I have a favorite literary fool: The Fool from Robin Hobb's Farseer and Tawny Man Trilogies.

I found Hobb's books wonderfully, horribly addicting. A friend read Assassin's Apprentice on a plane flight and recommended it to me, and the next thing I knew I was knee-deep in a trilogy of trilogies (nonogy? Is that a word?). I tried to quit after the Farseer trilogy, really I did, because I thought the Liveship Traders series was too much about ships. For some reason, I am completely uninterested in books set on ships. I was wrong. I picked up the first book in the Tawny Man trilogy, which continues some of the characters and events from the Farseer trilogy and I discovered that it also continues some of the ideas from the Liveship Traders trilogy, so I had to go back and read all three of those, and it turned out I loved them as well. In fact, I became so engrossed in the series that I bought the last two of the Tawny Man trilogy in hardback, which I never do!

What I love about these series is the light touch of magic that is truly unique to Hobb's world. There are magical, fantastical elements that I've never seen anywhere else, but there are also fabulous adventures and intrigue regardless of the magic. The first trilogy focuses on FitzChivalry Farseer, the illigitimate son of the king whose magical talents lead him to be trained as an Assassin. This series is a great combination of fantasy, politics, and adventure.

But about the fool - he's a strange and mysterious guide and teacher for our hero, and comes into his own in the Tawny Man trilogy. He is both loyal and enigmatic, frequently offering wisdom couched in riddles, and changed as much by Fitz and his adventures as Fitz is changed by his tutelage. He's everything and nothing a royal fool should be, with great dignity despite his seemingly demeaning occupation.

I highly recommend this series! Help celebrate the fool!
Posted by Violet Vixen at 1:43 PM