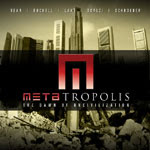 This book was originally conceived as an audiobook project in which five great scifi authors collaborated on creating a world, and then each author wrote their story separately and then they were published together. It's now being released as a book, but really the audiobook is worth hearing. I don't know if it's still going on but here Scalzi explains how to get the audiobook for free to celebrate it's Hugo nomination.

Anyway, this is post-apocalyptic scifi set in a very near future that feels all too present. That's what I was constantly amazed by in these stories - how current and possible a complete societal collapse and restructuring feels. In it, the U.S. has partially broken apart and re-formed into independent city-states, some of which are loosely affiliated with each other. They're separated by wilds of abandoned suburbs. The stories explore new ways of getting things done and organizing activities and people in less wasteful ways, from collectives and communes to underground rogue states to online games that overlay the real world. I'm impressed by how brilliant and engaging each of the individual stories were.

I bought this audiobook because I'm a fan of John Scalzi and because I've been meaning to read something by Elizabeth Bear for a while, but I was pleasantly surprised with how much I loved each of the stories. I was particularly impressed by Jay Lake's "In the Forests of the Night," narrated by Michael Hogan, which takes place in a forest in the Pacific Northwest when a stranger makes his way into a very private underground commune. I also loved Karl Schroeder's "To Hie from Far Cilenia," which explores what is possible when cities go virtual and political and social affiliations exist in layers on top of the current political reality. I think I'm going to have to check out more of each of these authors' works sooner rather than later.

If you like science fiction that makes you rethink your current reality, this is for you. I'm having trouble comparing it to anything because each of the stories is pretty different, but lets say the universe is sort of Blade Runner meets Little Brother with some Michael Pollan and Jared Diamond thrown in for good measure.
Posted by VioletReads at 11:56 AM