This post is in the spirit of the In My Mailbox posts hosted by The Story Siren and inspired by Pop Culture Junkie, though none of these books were in my mailbox - they all came from the LA Times Festival of Books, where I spent way too much money!

M.T. Anderson. The Astonishing Life of Octavian Nothing, Traitor to the Nation. Volume 1: The Pox Party. Candlewick Press: 2008. - I've been meaning to read this for a while. I foresee a historical fiction streak in my near future.

Raised by a mysterious group of rational philosophers, young Octavian is dressed in silks and given the finest of classical educations. His regal mother entertains the scholars with her beauty and wit, but Octavian questions the purpose behind his guardians' fantastical studies. As the disquiet of Revolutionary Boston grows around him, Octavian dares to open a forbidden door, only to discover the hideous nature of the experiments - and his own chilling role in them.

All Cammie Morgan wants is a peaceful semester, but that's easier said than done when you're a CIA legacy and go to the Gallagher Academy, the premier school in the world... for spies. Despite Cammie's best intentions to be a normal student, danger seems to follow her. She and her friends learn that their school is going to play host to some mysterious guests - code name: Blackthorne. Soon Cammie and her friends are crawling through walls and surveilling the school to learn the truth about Blackthorne and clear Cammie's name

Ally Carter. I'd Tell You I Love You, But Then I'd Have to Kill You. Hyperion Paperbacks: 2006. - Yay! This sound like so much fun! Hooray for teenage spies!

Cammie Morgan is a student at the Gallagher Academy for Exceptional Young Women a fairly typical all-girls school - typical, that is, if every school taught advanced martial arts in PE and the latest in chemical warfare in science, and students received extra credit for breaking CIA codes in computer class. The allagher Academy might claim to be a school for geniuses, but it's really a school for spies. Even though Cammie is fluent in fourteen languages and capable of killing a man seven different ways with her bare hands, she has no idea what to do when she mets an ordinary boy who thinks she's an ordinary girl. Sure she can tap his phone, hack into his computer, or track him through town the skill of a real "pavement artist" - but can she maneuver a relationship with someone who can never know the truth about her?

Carol Higgins Clark. Jinxed. Pocket Star Books: 2002. - This just looked totally cute. I've always associated Mary Higgins Clark and Carol Higgins Clark with my mother, but I think it's time to give this one a try and admit I may actually like some of the same books as my mom (GASP!). Also, this appears to be the 6th book in a series. Oops!

A fun detective romp set in California wine country. Regan, a private investigator, must find Whitney, an actress, before her great-aunt Lucretia's wedding as Whitney's family, former hippies running the Altered States Bed & Breakfast and Meditation Center, will receive a fortune if everyone attends. Lucretia, an aging silent-film star, inherited a fortune and then made more money in a dot-com enterprise. Of course, the groom and his cronies are criminals out to thwart the family attendance by kidnapping Whitney so that they will receive more money. Add to this framework a motorcycle gang, two friends in their 90s, buried treasure, news coverage, and wildfires for an exciting mystery. (description from School Library Journal via Amazon).

Junot Díaz. The Brief Wondrous Life of Oscar Wao. Riverhead Books: 2008. I hear such good things about this, and it won the Pulitzer, so it must be worth reading.

Oscar is a sweet but disastrously overweight ghetto nerd, a New Jersey romantic who dreams of becoming the Dominican J.R.R. Tolkien and, most of all, of finding love. But Oscar may never get what he wants. Blame the fukú - a curse that has haunted Oscar's family for generations, following them on their epic journey from the Dominican Republic to the United States and back again.

Denise Hamilton, Ed. Los Angeles Noir. Akashic Books: 2007. - I write about film noir and Los Angeles history in some of my academic work, so it's natural that I do a little fiction reading around it.

Los Angeles Noir brings the ethos of Chandler and Cain filtered through a twenty-first-century, multicultural lens. This is a literary travelogue from the Chinese mansions of San Marino to the day spas of Koreatown to the windy hills of Mulholland Drive, the baby gangsters of East Hollywood, the OG entrepreneur of Leimert Park, the old money of Beverly Hils, and the working class of Mar Vista. Los Angeles Noir offers tales of crime and passion and betrayal from some of the most innovative and celebrated writers working today.

Ever since Harper Connelly survived a zap from a lightning bolt, she's been able to find dead people, a skill that makes the protagonist in the first installment of Harris's new series a tad more bizarre than the mind-reading heroine of the author's Sookie Stackhouse books (Dead as a Doornail, etc.). Harper travels to the Ozark town of Sarne, Ark., to find a missing teenage girl's body, accompanied by her stepbrother, Tolliver, who acts as her manager and bodyguard and with whom she shares a thinly disguised physical attraction that they manage to keep at bay by engaging in casual sex with various partners. Finding the body takes no time at all, but leaving town afterward isn't so easy. When Harper's life is threatened and Tolliver ends up in jail on trumped-up charges, it quickly becomes apparent that something sinister is going on in Sarne. (from Publishers Weekly via Amazon).

Jennifer Kaufman and Karen Mack. Literacy and Longing in L.A. Bantam Dell: 2006. - It's set in LA and about someone who loves books, how could I resist? Looks like fun chicklit, but I'm a little worried that the story may reject books in the end, in favor of a man and "real" life. I'll have to read it and see!

Dora, named for Eudora Welty, is an indiscriminate book junkie whose life has fallen apart. She's coping with a painful separation from her husband, scraping the bottom of a dwindling inheritance, and attracted to an aspiring playwright who seems to embody all that literature has to offer - intelligent ideas, romance, and an escape from her problems. As she navigates the road between reality and fiction, Dora faces powerful choices: between two irresistible men, between idleness and work, and most of all between the joy of well-chosen words and the untidiness of real people and real life. 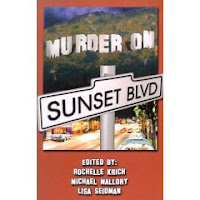 There are a million stories along this Boulevard of Dreams. Murder on Sunset Boulevard contains twelve of them, imagined by members of the Los Angeles Chapter of the international organization Sisters in Crime. But more than simply a collection of tales, Murder on Sunset Boulevard is a veritable journey down the city's 25-mile -long mother road, revealing the desires, dreams, failures, hopes, and passions of the people who make up the diverse fabric of Los Angeles.

John Scalzi. Zoe's Tale. Tor: 2008. - YAY! This is the book I was most excited to get. It's not even supposed to be released until next week! I've started it already.

How do you tell your part in the biggest tale in history? I ask because it's what I have to do. I'm Zoë Boutin-Perry: a colonist stranded on a deadly pioneer world. Holy icon to a race of aliens. A player and a pawn in an interstellar chess match to save humanity, or to see it fall. Witness to history, Friend. Daughter. Human. Seventeen years old. Everyone on Earth knows the tale I am part of. But you don't know my tale: how I did what I did - how I did what I had to do - not just to stay alive but to keep you alive, too. I'm going to tell it to you now, the whole thing, the only way I know how: not straight but true, to try to make you feel what I felt; the joy and terror and uncertaity, panic and wonder, dispair and hope,. All through my eyes. It's a story you know. But you don't know it all.

Mary Shelly. Frankenstein (1818). Ed. Maurice Hindle. Penguin Books: 2007. It's almost a crime that haven't read this yet, and I couldn't resist the fabulous comic-style cover. Even though I could have gotten the story more cheaply, I love this edition.

A deluxe edition of Mary Shelley’s haunting adventure about ambition and modernity run amok. Now a Penguin Classics Deluxe Edition with an introduction by Elizabeth Kostova and cover art by Ghost World creator Daniel Clowes, Mary Shelley’s timeless gothic novel presents the epic battle between man and monster at its greatest literary pitch. In trying to create life, the young student Victor Frankenstein unleashes forces beyond his control, setting into motion a long and tragic chain of events that brings Victor to the very brink of madness. How he tries to destroy his creation, as it destroys everything Victor loves, is a powerful story of love, friendship, scientific hubris, and horror. (Amazon product description).

Salman Rushdie The Enchantress of Florence. Random House: 2008. I thought this sounded lush and brilliant when it first came out in hardback, so I figured I should pick it up now that it's in paperback.

The Enchantress of Florence is the story of a mysterious woman, a great beauty believed to possess the powers of enchantment and sorcery, attempting to command her own destiny in a man's world. It is the story of two cities at the height of their powers - the hedonistic Mughal capital, in which the brilliant emperor Akbar the Great wrestles daily with questions of belief, desire, and the treachery of his sonse, and the equally sensual city of Florence during the High Renaissance, where Niccolo Machiavelli takes a starring role as he learns, the hard way about the true brutality of power.

Connie Willis. To Say Nothing of the Dog. Bantam Books: 1998. - Humor and time traveling sounds like fun to me! I'm a little worried that I should read Three Men in a Boat first, though.

Ned Henry is badly in need of a rest. He's been shuttling between the 21st century and the 1940s searching for a Victorian atrocity called the bishop's bird stump. It's part of a project to restore the famed Coventry Cathedral, destroyed in a Nazi air raid over a hundred years earlier. But the Verity Kindle, a fellow time traveler, inadvertently brings back something from the past. Now Ned must jump back to the Victorian era to help Verity put things right -- not only to save the project but to prevent altering history itself.

Note: All descriptions from the back of the book (some edited) unless otherwise specified.
Posted by VioletReads at 12:29 AM