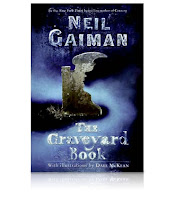 Neil Gaiman is an expert storyteller of the best sort, and The Graveyard Book provides an excellent example of that skill. The Graveyard Book tells the story of Nobody Owens (Bod for short), a young boy raised by ghosts in a graveyard after his parents are murdered. It references Rudyard Kipling's The Jungle Book, where folk tales and the supernatural replace the wilds of India. It's a story of a boy becoming a man in the face of danger; Gaiman tells an old story with the best, making it feel new and exciting despite the familiarity.

This novel won the 2009 Newberry Medal and the audio recording won audible's Tournament of Audiobooks. There's a reason this book is getting lauded. It's a beautiful, simple, excellently crafted and thoroughly entertaining story. It makes the fantasy elements of ghosts and phantoms and witches both homey and mysterious, crossing old familiar folk tales with new twists and strange mythologies and it does it in such a way that I just enjoyed the story washing over me. Hearing Gaiman read his own novel is as familiar and comforting as my own father reading bedtime stories when I was little. It made me want to download the rest of Gaiman's audiobooks. If you like ghost stories or Gaiman, you should definitely check this out, either in book or audio form.
Posted by VioletReads at 9:12 PM